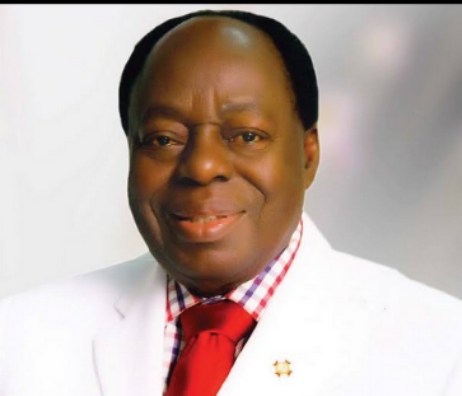 Elder statesman and legal icon, Aare Afe Babalola, (SAN) has clarified that his stance on a national conference for the country was only advisory, not that he is the one to single-handedly sponsor such.

He has also explained that his decision to assist with money as well as his personal facilities for the proposed confab, was borne out of patriotism, believing that his personal contributions would encourage other privileged persons in the society to also support and encourage government into embracing the idea so the country can get solutions to its problems in no time.

According to him, the peace conference that he suggested under the name “Summit of Hope”, was to find ways out of the current national challenges, and not to devide the country as being miscontrued in some quarters.

The Nonegarian gave the clarifications while speaking at the weekend in Ado Ekiti in a goodwill message at the foundation laying ceremony of the “NBA House” in Ado Ekiti, the Ekiti State capital, saying he is a steady friend of government whose views and advice had always been respected in the past.

He said that was why he enlisted the support of the Ooni of Ife, Oba Adeyeye Ogunwusi to also use his vantage position to reach out to other eminent Nigerians on the need for them to help government and embrace the idea.

He explained that his initiative was particularly a direct response to an earlier request by the Federal Government, through Vice President Yemi Osinbajo, asking men and women of goodwill to contribute into the project of moving Nigeria forward.

Babalola said, as a leading member of those that worked for the creation of Ekiti state in 1996 and who had also contributed in no small measure in contributing to the progress of the country in all spheres, he could not have been part of those working for the collapse of a country he worked hard to build or planning with others to pass a vote of no confidence on the president under whatever guise.

” At the lecture organised by Ado Ekiti branch of NBA a couple of days ago, and chaired by the Ooni of Ife, His Imperials Majesty, Oba Adeyeye Enitan Ogunwusi, Ojaja II and witnessed by more than 20 Obas, including the Ewi of Ado-Ekiti, Oba Rufus Adeyemo Aladesanmi III, who was the Royal Father of the Day, some feelers after the lecture gave an impression that I dared government on the issue of organising conferences.

” No, I did not, you will recall that in my remarks, I only mentioned the present precarious nature of the country’s security architecture and how we should not allow the country to drift into anarchy.

” I went ahead to plead with the highly revered Ooni of Ife to lead other opinion leaders and opinion moulders like all former Presidents of this country, the leaadership of the National Assembly, notable traditional and religious leaders as well as Civil Society Organizations to the conference, tagged “Summit of Hope”

” I said it would consist of past Presidents, members and representatives of National and State Assembly, VCs, Obas, Emirs, Trade Unions etc that will suggest how the country will have a new constitution to solve our labyrinth of problems.

” In appreciation of my patriotic call, all dignitaries present at the event rose in unison to applaudb my suggestion. It will surprise you that a particular person writing for an On-line medium, wrote as follows: “Afe Babalola dares Presidency, goes ahead with plan to organize National Confab Despite FG’S Warning

” For the avoidance of doubt, the publication went further to say, i have ignored the warnings of the Presidency by coming up with plans to organize a National Conference that would be sponsored by me.

” I have searched for the statement of Mr. Femi Adesina, on behalf of the President and wish to state that the kind of summit I am suggesting does not have plans to subvert anything in that direction.

” As lawyers, you will agree with me that the publication by the blog I referred to is a false and malicious publication calculated to disparage and expose me to hatred, contempt and to lower me in the estimation of right-thinking people in the society which in itself is a contravention of Section 373 of theCriminal Code Act Cap C 38 Laws of the Federation of Nigeria 2010.

” However, as lawyers, you all equally know that the constitution is very clear on the right of all of us, either singly or together, to advise government, in good faith, on how the country can move forward, devoid of disintegration or anarchy. This was exactly what I did.

” The Vice-President, Yemi Osinbajo recently blamed Nigerian elites for keeping quiet, and that formed part of the reasons why I took up the challenge.

” Even the Ooni of Ife acknowledged my suggestion as a patriotic gesture.I wonder how my suggestion to the Ooni of Ife, to help me summon all living former Nigerian Presidents, the leadership of the National Assembly, Governors, Religious Leaders and frontline Traditional Rulers as well as Civil Society Organizations, which was made in good faith, now amounts to conspiracy to remove the government from power

” The government statement said among other things that: “The Presidency on Tuesday claimed it had evidence to show that some “disruptive elements”are recruiting ethnic groups and politicians with the motive of
convening conferences where a vote of no confidence would be passed on President Muhammadu Buhari. This was never the target of the type of conference i suggested.

” The Special Adviser to the President on Media & Publicity, Mr. Femi Adesina, in the statement titled “Our Response to DSS alert” said further, “the purpose of the move was to further throw the country into turmoil

”All I was doing, in my own case, was to prevent the country from disintegration and drifting into anarchy so that it can remain an indivisible entity, and not to throw the country into turmoil as being suggested.

“I am here to spend my own money and time to help government return decorum to our dear nation. There must not be anarchy or civil war.

Meanwhile, the Ekiti State Council of Elders, in a statement in Ado Ekiti on Friday after it’s Strategic Committee meeting, threw weight behind Babalola’s moves to help the Federal government return normalcy and peace to the country

A communique jointly signed by its President, Prof. Joseph Oluwasanmi, General Secretary, Mr. Niyi Ajibulu
and Public Relations Officer, Dr. Bayo Orire said the council was proud to identify with him, as well as the cooperation exhibited by the Ooni of Ife, and urged others to emulate his kind gestures.

The Elders Council said it would also organise a mini summit which would act as a prelude to the one advised on by the eminent lawyer.