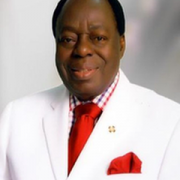 The Founder, Aare Afe Babalola, B.Sc (Econs) Lond; LL.B (Hons) Lond; FFPA, FNIALS, FCIArb, LL.D; Senior Advocate of Nigeria (SAN); Doctor of Letters (LL.D); Officer of the Order of the Federal Republic (OFR), and Commander of the Order of the Niger (CON), former Pro-Chancellor and Chairman of the Governing Council of the University of Lagos, Nigeria; the immediate past Chairman of the Committee of Pro-Chancellors of Nigerian Universities, winner of the Best Pro-Chancellor award in 2005 and 2006, winner of Queen Victoria Commemorative Award at Socrates Award of European Business Assembly in Oxford UK; member of the Rector of Europe, October, 2007; Vice President, Rector of Europe, 2010; and Honorary Professor of International University.

Aare Afe Babalola is the Africa Man of the Year on Food Security and has just been conferred with an award  Doctor of Management (Honoris Causa) at the just concluded Convocation Ceremony of the Federal University of Technology, Akure.

He holds degrees from several Universities like Ekiti State University for the award of LL.D (hc) in 2002, LL.D of University of London, LL.D of University Lagos, LL.D University of Jos, LL.D of Federal University of Technology, Akure, LL.D, Kogi State University, etc. The first Africa to be conferred with Doctor of Laws (Honoris Causa) of the University of London in 2015. Winner of Queen Victoria Commemorative Award at Socrates Award of European Business Assembly in Oxford UK. He won the African Award in Education 2011, African Man of the Year in Food Security, 2014. He was conferred with the Congressional Commendation of the US Georgia Legislative Black Caucus and inducted into the African Hall of Fame by the Advisory Board of the African Leadership Development Foundation, Inc. USA, and African Leadership (UK) Limited in 2016.

Aare Afe Babalola attended Emmanuel Primary School, Ado-Ekiti, where he obtained his standard six certificate. That was the end of his formal education. All the educational qualifications listed against his name above were obtained through private study. Aare Afe Babalola was at various times a pupil teacher, a secondary school teacher, secondary school vice principal, university lecturer, economist, auditor, administrator, farmer and educationist. Today, he is a foremost legal icon of his generation not only on the African continent but in the world.

The self-made man is proud of the qualitative primary education he had. It was the high quality of instruction received by him at the Primary School level, he says, proudly, that served as the foundation for his subsequent educational achievements. The founder is unhappy that the same quality of education is no longer available in most educational institutions.

This development and his experience of dwindling qualities on standard of education in the University of Lagos where he was the Pro-Chancellor between 2002 and 2007 and other universities usually regarded as the best in the country that informed him of the urgent need to establish a first class university to serve as a benchmark for other universities.

It is not going to be just one of the universities, it is going to be The University set to lead education reform by example in Nigeria.

ABUAD a VISION in MOTION